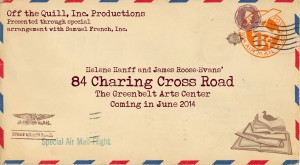 Best Director of a Play for Professional Theater 2014! (Elise Berg)

Helene Hanff, a struggling New York writer, finds more than the rare editions she seeks when she contacts Marks& Co., a small London bookshop. A graceful transatlantic dance of correspondence ensues, spanning four decades and abundant with literature, culture and affection.
(The action of the play is set in the New York apartment of Helene Hanff and in Marks & Co., Booksellers, 84 Charing Cross Road, London. The action spans the years 1949-1971)

All Performances at The Greenbelt Arts Center