Published on August 7, 2018, by PatrickOTQ in Author's Notes.

One of the great things about Off the Quill is that we are always looking for new, interesting ways to present the same universal stories. Whether it’s putting a movement piece where we create the universe at the beginning of Arthur Miller’s Creation of the World (and Other Business), creating and populating an entire book store in 84, Charing Cross Road by Helene Hanff, or growing a circus from Shakespeare’s greatest fight scenes in our original Violent Delights: A Shakespearean Brawl-esque Sideshow, OTQ has put a signature stamp on every property we touch (within the bounds of copyright law).

But in the case of Mary Shelley’s Frankenstein, we chose a unique challenge for ourselves. All of our previous adaptations were of stories, text, crafted for the medium of live performance. Frankenstein marked the first time we chose to adapt a novel. The framework of Frankenstein, or the Modern Prometheus as Shelley subtitled her famous work, is epistolary, (like 84). So the prose, while beautiful and haunting, is also a meandering narrative, better suited to an evening by the fire instead of on the stage. We found ourselves, like chemists, distilling her prose to its most potent, concentrated form.

Tom McGrath and I framed the show as a reckoning between creator and creation. A joint story as both flawed, but brilliant beings tried to puzzle out how they got here, from their good intentions. It is a convenient device which allows us the freedom to highlight the most dramatic moments. For example, we chose to gloss over the nearly three chapters outlining the forests outside Ingolstadt, and the Creature’s adventures therein.

We tried our best to keep Shelley’s voice, and present you with something you’ve never seen before. When people hear the name Frankenstein they expect horror, violence and blood. They think, superficially, that this story is about Man exceeding his grasp, or perverting nature; playing God. But there is depth to these characters, value beyond mere shock.

The lore of Frankenstein and his Creature is universally recognized, but has been twisted and misremembered over the years. Boris Karloff saw to that when he created that looming, green golem, devoid of language or thought, whom many refer to simply as “Frankenstein.” But that was not Shelley’s Creature. Hers is an intelligent, sensitive, philosophical soul locked away from the fellowship of humankind because of his appearance. He is Adam, cast out of Eden and abandoned by God, left to fend for himself.  Likewise, Viktor was not, in fact, a doctor – the Creature was merely his undergraduate project.

And Viktor Frankenstein is no mad scientist. He is well meaning, and arrogant; gregarious and vain; loving and neglectful. He seeks the answers that so many have pursued, but fails to heed his father’s warning – that knowledge without wisdom is dangerous.

We present the story of the modern Prometheus as it was written – a tragedy. A horrific tragedy, yes, but aren’t they all? So if you are feeling alone in the universe, unjustly shunned by society, hated and wretched (for as Shelley says, “All men hate the wretched.”) then this is your story, and may there always be enough light to fill the darkness.

I’ve known Stan Lee since childhood. He was my friend. An adult, yes, but an adult with the good sense to know his jokes were bad, who would let you spoil your dinner. The kind of guy who always seemed to be trying a little too hard, but was so endearing you couldn’t help but like him.

Published on July 18, 2017, by PatrickOTQ in Director's Notes, King Kirby.

I have a confession to make. As a kid, I never really liked Jack Kirby’s artwork. 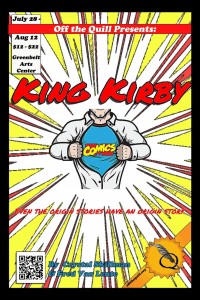 When I started collecting comics, the artist everyone was talking about was Neil Adams. I quickly became a Neil Adams super-fan. Jack Kirby’s (to my untrained eye) blocky and cartoony layouts just never measured up to Adams’ smooth, flowing compositions, featuring subtle, realistic facial expressions as well as his detailed knowledge of musculature and anatomy. I actually thought Kirby’s work was ugly by comparison…How foolish I was.